Last month while discussing the ways of the world late at night after far too much whiskey we came up with a master plan to host a pop-up bar!

The term ‘Pop-up’ had always conjured up images of sexy New York loft apartments serving Martinis and Tapas to an exclusive crowd of uber-cool kids. Quite frankly, not our cup of tea!  What we did like though was the concept of showcasing what we do and at ‘Raise the Bar’ what we do best is to create amazing drinks and marry that with serving unique, interesting food. Do it in a completely new environment and setting, blow people away,  then bugger off! Here today, gone tomorrow. This concept was synonimous with pop-up culture, but it has changed over time where now a pop-up can be around for a week or even months. Quite frankly, it being December, we didn’t have the time or energy for that guff so we poured it all into making it a spectacular one night affair.

So began the Merry-Monkey co-operative. Success in any bar or restaurant is based around creating the right team environment for ideas and strategies to grow. We recruited the help of friends and colleagues, and between us, the concept grew and developed.

A Victorian theme (It was Christmas), transport our guests into a plush,  opulent environment where they could forget about the madness of the Christmas shoppers outside on the street. Sexy lighting, candles, red velvet, classical music (for a while before the base kicked in!). Create the most original Cocktail list Cork had ever seen, don’t just serve snacks, push the boat out. We worked with lunatic genius Eoin O’Reilly from the House Cafe at the Opera house and developed a sharing platter for a fiver consisting of egg-nog marshmallows, mince pies made with mince, (like they used to be) reindeer obviously, because it was Christmas served with rhubarb and apple chutney, flour soup with artichoke, calf shin jellies with Absinthe and orange scented mayo. Also a praline made from insects we sourced from South East Asia!.  Shane ‘The Gaffer’ Quigley was my right hand man for all things cocktail and bar related. This guy has won more awards for himself and his bar over the last decade than anyone outside of Dublin. He was the only name on the list to work with us behind the stick. My wife and business partner, Grainne, teamed up with Vic the Riff to develop all things interior. We weren’t allowed remove anything on the wall so the girls just covered it all in fabric. On a €200 budget they completely transformed a grotty room into a thing of beauty. Massive shout out to the legend that is Pete from the Vintage quarter for lending us some great taxidermist pieces too. Our friends Katie and Johnny nailed it on the graphics and P.R. side. We were getting tweets from National broadcasters apologising that they couldn’t make it!
The night was a phenomenal success. To put it in bar terms we got bent over! The sink packed in half way through the night, the glass washer was hopeless. It was a proper head down and get through it kind of night. Two of us behind the bar, three on the floor and one in the kitchen. Absolutely slammed but it was such a thing of beauty. Knowing that room would have been empty if we weren’t there. The music, the energy and most importantly the Cocktails. Hot mulled drinks, Punches, seasonal signature recipes. We were very fortunate to get sponsorship from Jameson and Edward Dillons. Two companies at the forefront of the Cocktail industry in Ireland. Hopefully they didn’t mind us taking their beloved Hennessy and infusing it with bone marrow. I’m sure they didn’t! Check out our menu and if you have any questions about any of our food or drink recipes we’re more than happy to send them to you! Prost! 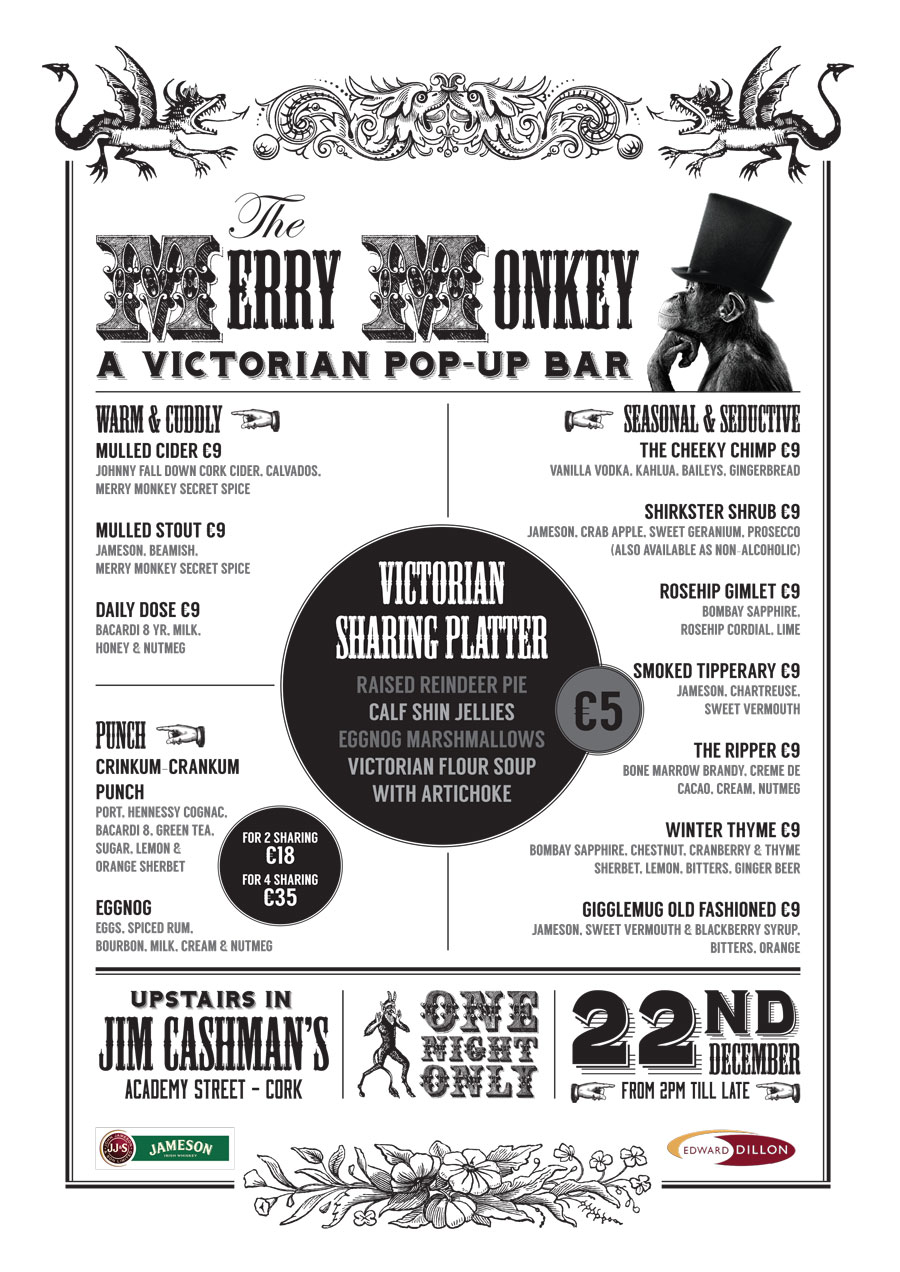 Raise the bar has A master plan to host a pop-up bar! January 27th, 2015admin

You can find us at